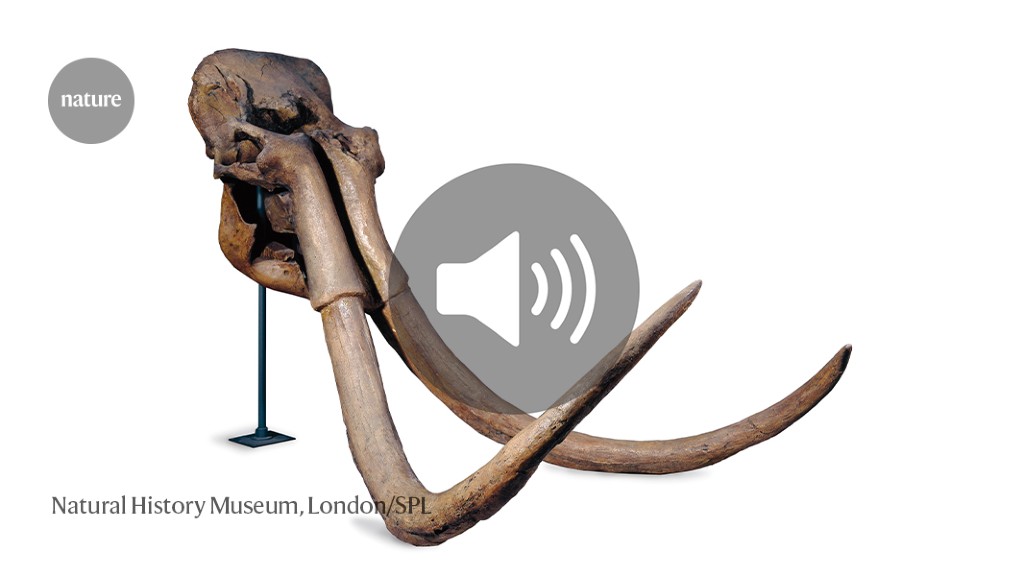 This week, researchers have smashed a long-standing record by sequencing a genome that’s over a million years old. They achieved this feat by extracting DNA from permafrost-preserved mammoth teeth, using it to build-up a more detailed family tree for these ancient animals.

A spacecraft catches a rare glimpse of a rock smashing into Jupiter, and the perilous state of sawfish populations.

Research Highlight: Robotic eyes spy the flash of a meteor on Jupiter

Research Highlight: Humans push a hulking fish with a chainsaw nose towards oblivion

12:18 Putting art into science (and science into art)

Art and science are sometimes considered disparate, but when brought together the results can be greater than the sum of their parts. This week we hear from an artist and a scientist on the benefits they found when crossing the divide.

Career Feature: How to shape a productive scientist–artist collaboration

Career Feature: How the arts can help you to craft a successful research career

Where I work: ‘All my art is curiosity-driven’: the garden studio where art and physics collide

Some resources for bringing arts and science together:

We discuss some highlights from the Nature Briefing. This time, a neanderthal gene makes brain-like organoids bumpy, and uncovering the original location of Stonehenge’s stone circle.

Subscribe to Nature Briefing, an unmissable daily round-up of science news, opinion and analysis free in your inbox every weekday.

Coinbase and Roblox take a page from Google, keeping marketing costs way down ahead of public debuts
EGEB: Moscow will have 1,000 electric buses by the end of 2021
Circular business model lessons from IKEA, REI and Eileen Fisher
How to cut costs at the pump as gas prices keep rising
Exxon shares jump as activist investor Jeff Ubben joins the board