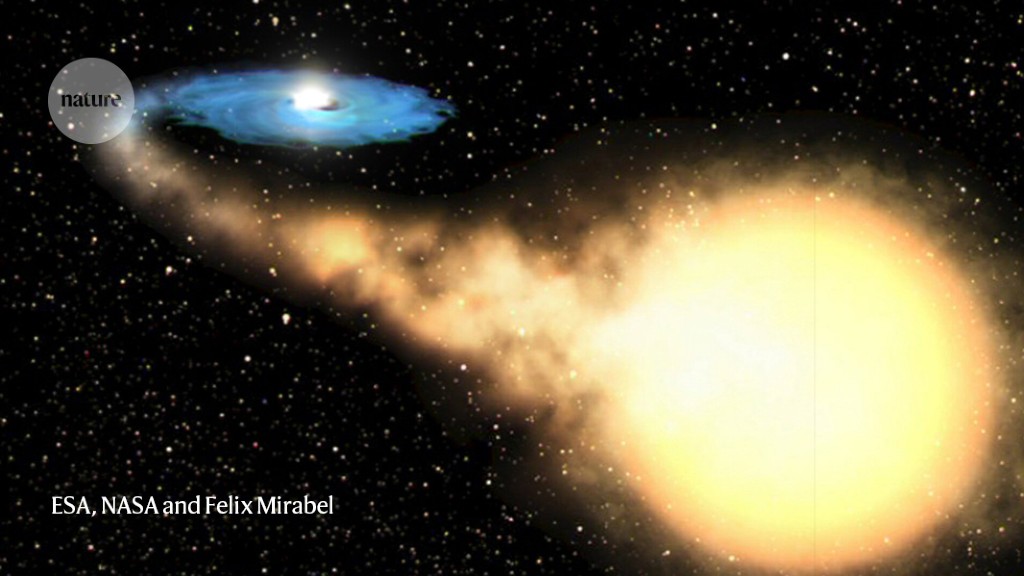 An ancient star cluster’s long ‘tails’ of stars seems to be the handiwork of an unseen clutch of black holes: their gravitational tugs fling stars outwards, and Galactic forces then pull the stars farther out.

Astronomers classify the group of stars called Palomar 5 as a globular cluster, a roughly spherical collection of old stars. Located some 20,000 parsecs from Earth, Palomar 5 is among the ‘fluffiest’ — or least dense — of the Milky Way’s globular clusters. But Mark Gieles at the University of Barcelona in Spain and his colleagues say the evidence suggests that the cluster was once much denser.

The researchers modelled how a variety of star clusters with Palomar 5’s orbit would evolve over a period of 11.5 billion years. The starting points that evolved into the best matches for Palomar 5 and its stellar tail were clusters in which black holes formed and stuck around, their gravity helping to push stars out to create the fluffy cluster we see today.

One billion years from now, the team’s work suggests, Palomar 5 will have jettisoned all of its stars; only black holes will remain.

Tesla Installed 85 Megawatts of Rooftop Solar Power in 2nd Quarter, But That Doesn’t Actually Show Demand
Toxic mercury rides rivers into the sea
Tesla Megapack caught fire at Victorian Big Battery site in Australia
Why some investors are banking on a bitcoin IRA instead of Social Security
Audio long-read: How ancient people learned to love carbs