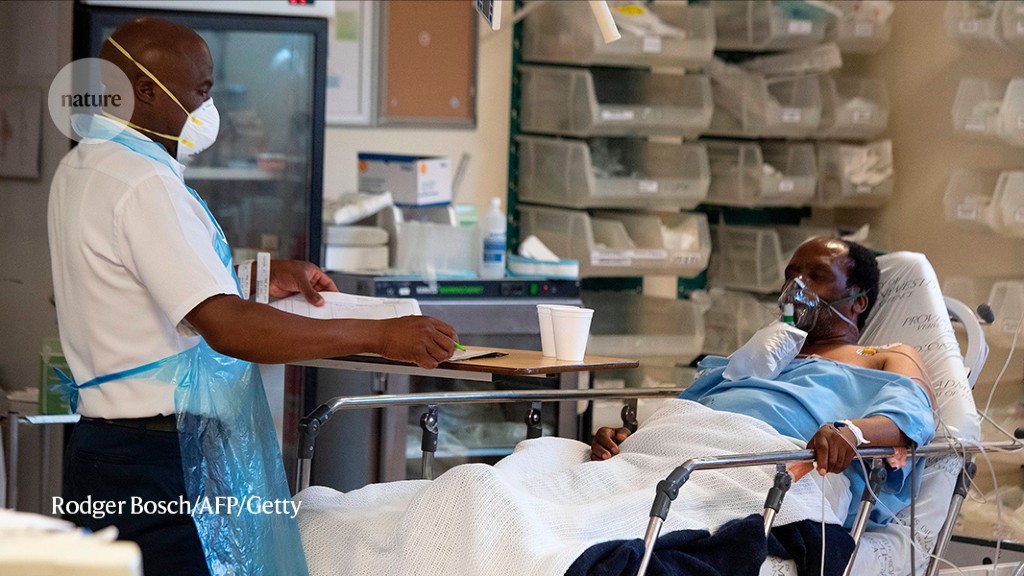 As concern grows over faster-spreading variants of coronavirus, labs worldwide are racing to unpick the biology of these viruses. Scientists want to understand why SARS-CoV-2 variants identified in the United Kingdom and South Africa seem to be spreading so quickly, and whether they might diminish the potency of vaccines or overcome natural immunity and lead to spate of reinfections.

“Many of us are scrambling to make sense of the new variants, and the million-dollar question is what significance this will have for the effectiveness of vaccines that are currently being administered,” says Jeremy Luban, a virologist at the University of Massachusetts Medical School in Worcester.

The first lab results are trickling in and many more are expected in coming days, as researchers rush to probe the viral variants and their constituent mutations in cell and animal models of SARS-CoV-2, and test them against antibodies elicited by vaccines and natural infections. A preprint published on 8 January1 found that a mutation shared by both variants did not alter the activity of antibodies produced by people who received a vaccine developed by Pfizer and BioNtech. Data on other mutations and vaccines are expected soon.

“By next week we’ll have much more information,” says Vineet Menachery, a virologist at the University of Texas Medical Branch in Galveston, whose team is gearing up to study the variants.

Researchers spotted both coronavirus variants in late November and early December 2020 through genome sequencing. A UK-wide COVID-19 genomics effort determined that a virus variant now known as B.1.1.7 had been behind surging case numbers in the southeast of England and London; the variant has now spread to the rest of the UK and has been detected in tens of countries worldwide (see ‘Viral sequences’).

And a team led by bioinformatician Tulio de Oliveira at the University of KwaZulu-Natal in Durban, South Africa, connected2 a fast-growing epidemic in the country’s Eastern Cape Province to a coronavirus variant they call 501Y.V2. The UK and South African variants emerged independently, but both carry a bevy of mutations — some of them similar — in the coronavirus spike protein, through which the virus identifies and infects host cells and which serves as the prime target of our immune response.

Epidemiologists studying the growth of the B.1.1.7 variant in the United Kingdom have estimated that it is around 50% more transmissible than existing viruses in circulation3 — an insight that contributed to the UK government’s decision to enter a third national lockdown on 5 January. “The epidemiology has really shown us the way here,” says Wendy Barclay, a virologist at Imperial College London and a member of a group advising the UK government on its response to B.1.1.7.

But it is important, Barclay adds, that scientists determine the underlying biology. “Understanding what properties of the virus make it more transmissible allows us to be more informed about policy decisions.”

One challenge is disentangling the effects of the mutations that distinguish the UK and South African lineages from their close relatives. The B.1.1.7 variant carries 8 changes that affect the spike protein, and several more in other genes; samples of the South African 501Y.V2 variant carry up to 9 changes to the spike protein. Working out which are responsible for the rapid spread of the variants and other properties is an “enormous challenge”, says Luban. “I don’t think there’s a single mutation that’s accounting for all of it.”

Much of the focus is centred on a change to the spike protein that is shared by both lineages, called N501Y. This mutation alters a portion of spike, called the receptor binding domain, that that locks onto a human protein to allow infection. One hypothesis hinted at in previous studies is that the N501Y change allows the virus to attach to cells more strongly, making infection easier, says Barclay.

The N501Y mutation is one of several that Menachery’s team is preparing to test in hamsters, a model for SARS-CoV-2 transmission. He was part of a team that reported4 last year that a different mutation to the spike protein enabled viruses to grow to greater levels in the upper airways of hamsters, compared with viruses lacking the change. “That’s what I’m expecting with these mutations,” he says. “If that’s the case, that’s going to be driving their transmissibility.” A report published in late December supports that hypothesis: it found more SARS-CoV-2 genetic material in the swabs of people infected with the B.1.1.7 variant, compared with those infected with viruses lacking the N501Y change.

The rapid spread of the variants has triggered efforts to contain their spread, through lockdowns, border restrictions and heightened surveillance. Adding to the sense of urgency is the worry that the variants could weaken immune responses triggered by vaccines and previous infection. Both variants harbour mutations in regions of the spike protein that are recognized by potent virus-blocking ‘neutralizing’ antibodies: the receptor binding domain and a portion called the N-terminal domain, says Jason McLellan, a structural biologist at the University of Texas-Austin, who studies coronavirus spike proteins. This raises the possibility that antibodies to these regions could be affected by the mutations.

As a result, academic and government researchers and vaccine developers are now working around the clock to address the question. “This is crazy speed,” says Pei-Yong Shi, a virologist at UTMB who is collaborating with Pfizer to analyse blood from participants in their successful vaccine trial. In the 8 January preprint, the team found little difference in the potency of antibodies generated by 20 participants against viruses carrying the N501Y mutation, compared with viruses lacking the change. The team is now examining the effects of other mutations in the variants.

In a related experiment, a team led by his colleague Menachery also found that the 501Y mutation, at least, did not drastically affect the activity of neutralizing antibodies in convalescent serum – the antibody-containing portion of blood taken from people who have recovered from COVID infection. This suggests that the 501Y mutation is unlikely to alter immunity, adds Menachery, who posted the data to Twitter on 22 December.

But other mutations might. Prime among those is another receptor-binding-domain mutation that de Oliveira’s team have identified in the 501Y.V2 variant, called E484K. His team is working with virologist Alex Sigal at the Africa Health Research Institute in Durban to test the variant against convalescent serum and serum from people who have been vaccinated in trials. The first results from these studies should be public in a few days, says de Oliveira.

There is emerging evidence that the E484K mutation can enable the virus to escape some people’s immune responses. In a 28 December preprint5, a team led by immunologist Rino Rappuoli, at the Fondazione Toscana Life Sciences in Siena, Italy, grew SARS-CoV-2 in the presence of low levels of one person’s convalescent serum. The goal was to select for viral mutations that evade the diverse repertoire of antibodies generated in response to infection. “The experiment wasn’t necessarily supposed to work,” says McLellan, a co-author. But within 90 days, the virus had picked up 3 mutations that made it impervious to the person’s serum — including the E484K mutation in the South African variant and N-terminal domain changes found in it and the UK variant. “That was surprising,” says McLellan, because it suggested that the individual’s entire antibody response against SARS-CoV-2 was directed against a small portion of the spike protein.

The lab-evolved strain proved less resistant to convalescent sera from other people. But the experiment suggests that mutations such as E484K and N-terminal domain changes carried by both variants could affect how antibodies generated by vaccines and previous infection recognize them, says McLellan.

Biotech firm Moderna in Cambridge, Massachusetts, which has developed an RNA-based vaccine, has said that it expect its jabs to work against the UK variant and that tests are under way.

A pressing question is whether such changes will alter the real-world effectiveness of vaccines, says Jesse Bloom, a viral evolutionary biologist at the Fred Hutchinson Cancer Research Center in Seattle, Washington. In a 4 January preprint6, his team also reported that E484K and several other mutations can escape recognition by antibodies in peoples’ convalescent sera to varying degrees.

But Bloom and other scientists are hopeful that the mutations in the variants won’t substantially weaken the performance of vaccines. The shots tend to elicit whopping levels of neutralizing antibodies, so a small drop in their potency against the variants may not matter. Other arms of the immune response triggered by vaccines, such as T-cells, may not be affected. “If I had to bet right now, I would say the vaccines are going to remain effective for the things that really count — keeping people from getting deathly ill,” says Luban.

Geobacter: The “Iron Man” Bacteria that Metalizes Itself
Why carbon tracking and reporting is necessary to hold corporations accountable
My international career journey as a disabled scientist
Splashdown Recap: Bob & Doug Come Home
New Report Sheds Light on America’s Monopolized Energy Sector … And How We Can Fix It