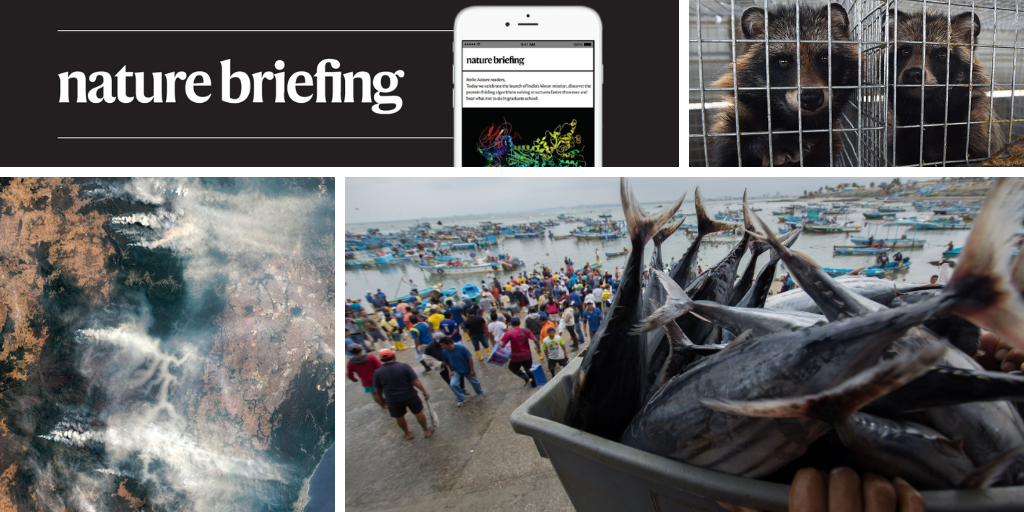 Hello Nature readers, would you like to get this Briefing in your inbox free every day? Sign up here.

The extreme bush fires that blazed across southeastern Australia in late 2019 and early 2020 released 715 million tonnes of carbon dioxide into the air — more than double the emissions previously estimated from satellite data. Plot twist: a lot of that might have been mopped up by phytoplankton in the ocean. Wildfire smoke infused the Southern Ocean with iron, nourishing phytoplankton. A huge bloom of the microscopic plants sucked up carbon equivalent to as much as 95% of the emissions from the fires. The question remains as to where the carbon taken up by the plankton eventually goes, and whether it makes it back out into the atmosphere.

The best way to overcome the enormous inequality in access to COVID-19 vaccines might be to enable more lower-income countries to make their own. There was some momentum behind a waiver on COVID-19 vaccine patents, but action on this front has stalled. Now, advocates are clamouring for a variety of approaches. Some call for Johnson & Johnson (J&J) to partner with drug companies in the global south that are already tooled up to produce the Russian Sputnik V vaccine, because Sputnik V and the J&J vaccine rely on similar technologies. A group in South Africa has decided to try and recreate existing vaccines. Others argue that funds would be best spent on getting manufacturers in the global south prepared to pump out the next generation of vaccines currently in clinical trials.

Did the coronavirus jump to people twice?

SARS-CoV-2 might have spilled from animals to people multiple times, according to a preliminary analysis of viral genomes sampled from people infected in China and elsewhere early in the pandemic. If confirmed, the findings would add weight to the hypothesis that the pandemic originated in multiple markets in Wuhan. It would also make the hypothesis that SARS-CoV-2 escaped from a laboratory less likely. The data need to be verified, and the analysis has not yet been peer reviewed.

The United States’s death toll from COVID-19 exceeded 663,000 this week — meaning roughly 1 in every 500 people in the country have died from the disease. The burden fell heavily on certain groups: 1 in 35 people older than 85 died of the illness, compared with 1 in 780 among people between 40 and 64 years old. Among younger people, death rates were starkly higher for Black, Latino, American Indian and Alaska Native people than for Asian and white people in the country.

“We must deal with the reality that we are facing. We cannot wish it away.”

Alberta premier Jason Kenney yesterday declared a state of public-health emergency — and apologized for his government’s laissez faire approach to COVID-19. Medical practitioners had warned that the Canadian province’s health system is on the brink of collapse. (The Globe and Mail | 6 min read, free registration required)

Blue food to feed the world

Aquatic foods —, such as fish, shellfish and seaweed, collectively known as blue foods — show potential for building healthy, sustainable and equitable food systems. This collection, the result of a collaboration between The Blue Food Assessment and the Nature journals, shines a light on the contribution that aquatic foods can make to future food systems and the challenges that need to be tackled if these contributions are to be realized.

• Greenhouse-gas emissions, nitrogen and phosphorus pollution, and freshwater and land use are all among the factors that must be understood to make the most of blue food. Researchers found that farmed bivalves and seaweeds generate the lowest emissions and use the fewest land and water resources, and they identified many finfish options with low emission and resource use, both farmed and wild caught. The team also modelled ways to improve the environmental performance of aquatic foods, in some instances cutting emissions by half. (Nature | 6 min read)

• Aquatic foods have been neglected by researchers and policymakers. It’s time to recognize them, argues a Nature editorial. (Nature | 5 min read)

• In many places, fish are not usually just another healthy complement to an already rich assortment of foodstuffs — they are an irreplaceable source of micronutrients and protein. Researchers have modelled the potential benefits of increased seafood availability on micronutrient deficiencies and cardiovascular health. (Nature News & Views | 8 min read, Nature paywall)

Read the whole collection of articles and research

Quote of the day

“We also spent many hours on mundane tasks, such as studying the nutritional content of different brands of bologna sausage, to better emulate a cafeteria diet fed to rats in one experiment.”

All aboard, train fanciers: join me in ogling the world’s first locomotive to be powered solely by rechargeable batteries. Instead of diesel, its engine room houses stacks of 500 lithium-ion battery modules, which it charges using regenerative braking. Toot toot!

Let me know what’s got your motor running in the world of science, and any other feedback on this newsletter. Your e-mails are always welcome at briefing@nature.com.

With contributions by Smriti Mallapaty

Wärtsilä Report Urges 100% Renewables Sooner, Uruguay Proves It Can Happen Now
NASA’s Mission Lucy to Unravel Solar System Origin Launches Today on a 12-Year Journey
The case for ‘hope punk’ when talking about climate change: ‘To be hopeless is to be uninformed’
Quick Charge Podcast: October 18, 2021
Octopus: Why Factory Farming This Clever Cephalopod is Absolutely Barbaric