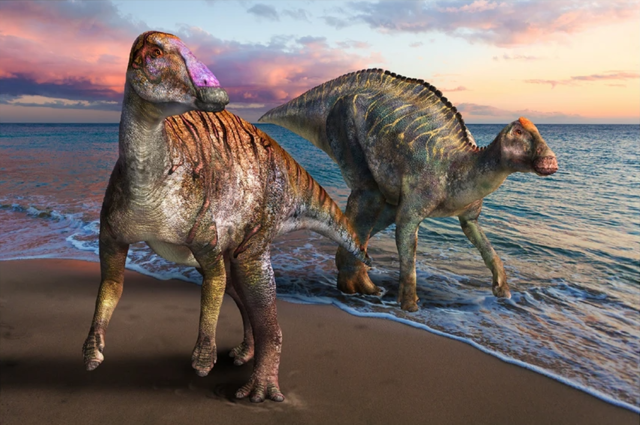 Hadrosaurs are one of the biggest families of herbivorous dinosaurs during the Cretaceous Period. However, many paleontologists are still not entirely sure about which part of the prehistoric world they first appeared as well as how their different species evolved and migrated from then on.

For a while the prevailing theory was that they first began migrating from North America and spread to Asia when the two continents were once joined. However, the discovery of a new Hadrosaur species in Japan may have just turned this theory around!

The new species was dubbed Yamato izanagii or alternatively, Yamatosaurus (named after the legendary kingdom of Yamato). Its first recorded remains were found by a local part-time fossil hunter who then drew the attention of the team who finally confirmed it as a new species. To date, this was the second hadrosaur species found in Japan.

Like other Hadrosaurs, Yamatosaurus had a duckbilled snout with multiple rows of numerous blunt teeth, specifically designed for chewing plants. However, the teeth of this particular species was a strangely different case. Most other duck-billed dinosaurs had teeth that were considerably expendable and easily fell away to be replaced by new ones.

For Yamatosaurus though, the teeth appeared tougher and they did not look like they would just break off and grow back as quickly as their cousins. This led paleontologists to guess that it must have eaten plants that were different from those in the diet of the more mainland Hadrosaurs.

Another major (and arguably more significant) difference was its skeletal structure was somewhere in a transition between a two-legged and four-legged posture. This fell right in line with the prevailing theories regarding hadrosaur evolution, and thus one big indicator that the duck-billed dinosaur family may have actually originated in Asia.

Japan certainly has a reputation for popularizing giant, mutant dinosaurs (and a lot of giant robot ones as well). Yet despite this, dinosaur fossils are actually far less common than its pop culture would suggest. Most of Asia’s dinosaur specimens had been found in China and Mongolia.

Despite this, Yamatosaurus’ discovery shows that the handful of species discovered in the country do hold a lot of significance when it comes to understanding how dinosaurs migrated and evolved.

North America and Asia were much closer during the Cretaceous period. And with their combined mass, there was no doubt an abundance of various ecosystems (each with their own way of affecting the evolution of their resident species).

Japan’s dinosaurs, in particular, have quite an interesting record of strange adaptations. Another species called Fukuivenator was said to be a very unique example of a predatory raptor slowly adopting an omnivorous diet. Meanwhile, a dinosaur known as Fukuisaurus had baffled scientists with a skull that did not appear built for chewing despite being a herbivore. In any case, Japan could still have many paleontological secrets about the ancient reptiles that lived in far most eastern side of the mesozoic world.

New York jet fuel gets pricier as Colonial Pipeline outage continues
11 young professionals on the future of sustainable finance
The US Infrastructure Bill & the Costs of a Sustainable Transition
Why everyone from Elon Musk to Janet Yellen is worried about bitcoin’s energy usage
After Chinese rocket reentry, DoD calls for countries to ‘behave responsibly’