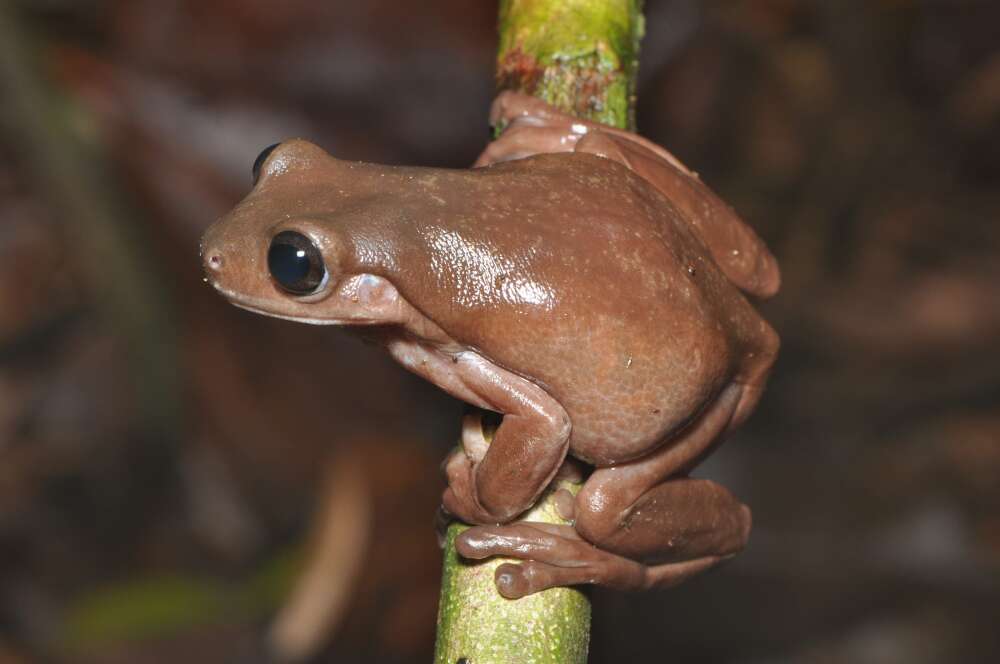 A rare tree frog was discovered in the lowland rainforests of New Guinea and its unique chocolate-colored feature surprised Queensland Museum scientists.

Scientists confirmed that the likely new frog species was related to the common green tree frog of Australia known as Litoria mira. The genus litoria is a Pelodryadidae tree frog native to Australia and often generally referred to as Australasian treefrogs.

Unlike other tree frogs recognized for their green skin, the Litoria mira is brown. Lead author of a study and Griffith University and Queensland Museum phylogeneticist Dr. Paul Oliver said that new frog got its name Mira from Latin word which means surprised or strange, but they prefer calling it the ‘chocolate frog’.

Co-author Steve Richards from the South Australian Museum added that the researchers primarily assumed that the new-found frog species is already widespread in that unexpected region of New Guinea before it was even discovered.

Biogeography of the Treefrogs

There had been some confusion among the team about the exact classification of the green tree frog whether it is under Litoria or Ranoidea. Ranoidea on the other hand, is a genus of frogs in the subfamily Pelodryadinae also known as the ‘white’s tree frog’, also inhabiting both regions of Australia and New Guinea. Other scientists disagreed to this assumption due to missing data in the genetic analysis so scientist continued to refer the green tree frog as Litoria in their study.

Some thousands of years ago when the planet was colder and the sea levels were lower, researchers think that the Australian green tree frog or Litoria caerulea may have crossed the northern part of Australia and New Guinea through a land bridge between the two land masses 150 kilometers apart. The team had investigated that there could be a significant interaction between the Litoria caerulea and the Litoria Mira which expanded the frog’s range across different climates; with the ‘chocolate frogs’ now mostly located in the rainforests of New Guinea and the savannah area in Northern Australia.

The team claimed their study was first to present the phylogenetic and phylogeographic data for both frog species across these two regions.

Also read: After the Bushfires: Australians Record Frog Calls and the Amazing Results

The data collection and analysis of specimen revealed that the L. caerulea gotten from southern areas of New Guinea shared many traits with those in far North Queensland. However, those which were found in more swampy rainforest areas, the L. caerulea weren’t not distinguished as caerulea at all.

On the other hand, the L. Mira was classified as legit Litoria through its large size, uniformly brown color, and more specific features at the edge of eye, limbs, torso and throat. While there are 215 species in the Pelodryadidae family, both Litoria and Ranoidea, the team cannot fully conclude that there is only one of their species in the region associated with brown color.

Queensland Museum CEO Dr Jim Thompson believes that taxonomy plays a significant role in understanding the biodiversity of the world. At this time, exploration of the new frog species is unlikely due to their hot, swampy (with lots of crocodiles) habitat, but they wish to ‘unlock new information’ about their biodiversity in the future through innovative genetic technologies.

Also read: Some Female Frogs Have Noise-Erasing Lungs to Restrain Calls Of Other Species

Ford F-150 Lightning’s 300-mile range is with 1,000 lbs of cargo, actual range could be over 400 miles
Daily briefing: The NAS expels a member for the first time
Quick Charge Podcast: May 27, 2021
How to send an item from Amazon as a gift so people know who sent it
Amazon’s new $180 tablet is good, but most people should still get an iPad