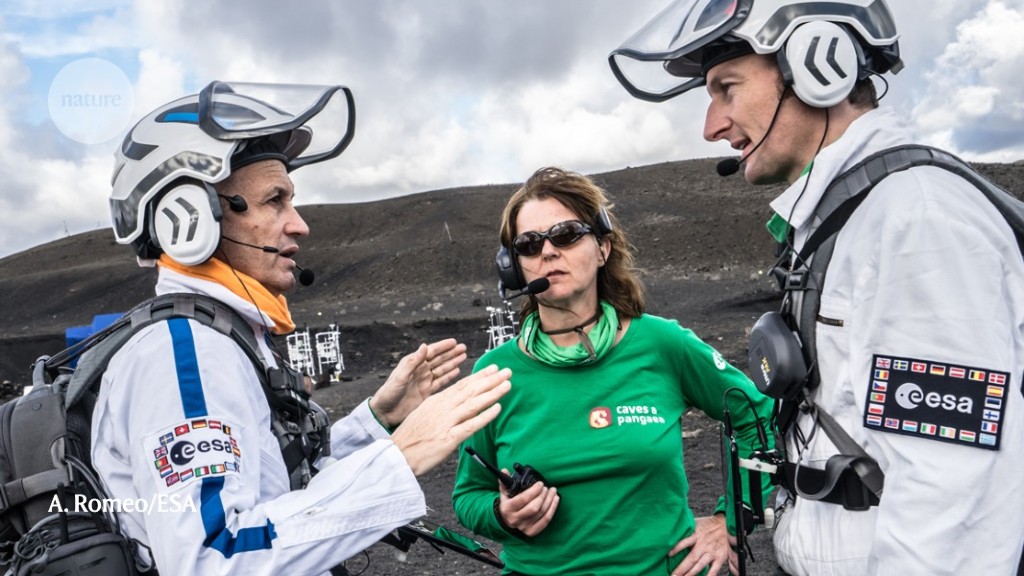 I have been training astronauts at the European Space Agency (ESA) since 1992, when I was a computer engineer teaching them about information technology. I gradually took on more types of training, and have helped to design prospective human missions to Mars as well as missions to explore lunar caves.

This picture was taken in 2018 on Lanzarote, part of Spain’s volcanic Canary Islands. There’s little vegetation there, so it is a fantastic analogue for the Moon and Mars. We are debriefing here after a lunar simulation in which the astronauts learnt to identify and collect the most interesting rock samples for studying geological history. It was part of a three-week field course that the ESA introduced in 2016 that prepares astronauts for observing geological features.

We’ve done training sessions in the fjords of Norway; in the Bletterbach canyon in the Dolomites, in northeast Italy; and at the Nördlinger Ries impact crater site in southwest Germany. At sites such as these, astronauts learn how to select the best possible rock samples to take back to Earth. We have only 300 kilograms of rocks from the Moon, which are still being analysed. It’s like gold to have these rocks for studying the origin of our Solar System.

Since 2011, I’ve also run a programme in which a team of up to six astronauts spends six days and nights isolated in caves on the Italian island of Sardinia, or in Slovenia. The astronauts are by themselves, and sometimes have to squeeze through narrow passages, but I follow them with safety instructors, a doctor and video operators to monitor their welfare. In space, the farther from Earth they go, the more responsible they are for their own safety.

Moon and Mars rocks offer a window into Earth’s first billion years, of which we have only rare, localized records. We need astronauts to make the most of every chance to retrieve a chunk of Earth’s history.

Education outreach can inspire the next generation of scientists

Use microaffirmations and call out microaggressions to help others

Education outreach can inspire the next generation of scientists

Hunting the strongest accelerators in our Galaxy

The most detailed 3D map of the Universe ever made