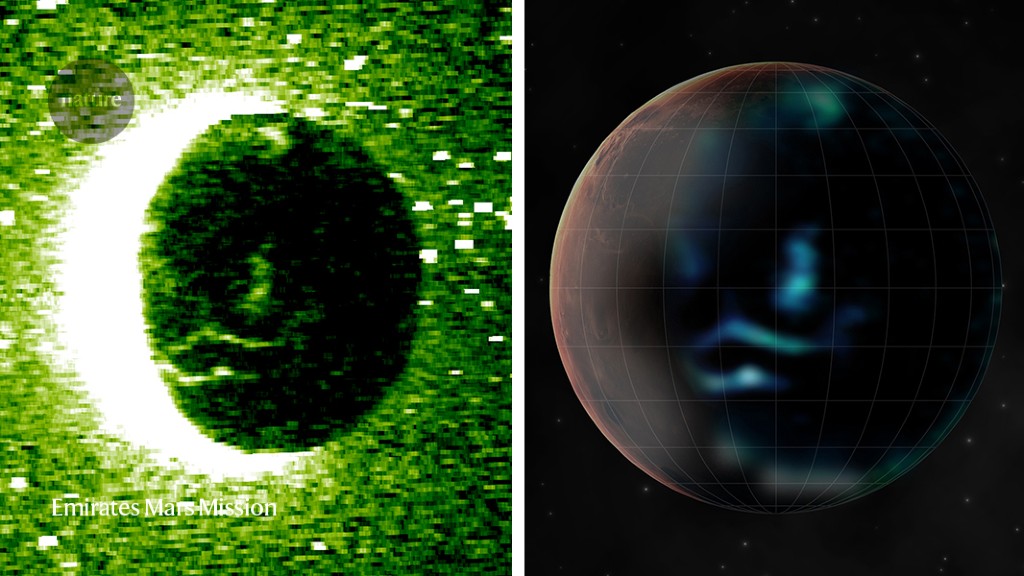 The United Arab Emirates’ Hope spacecraft has taken the most detailed pictures yet of the ‘discrete auroras’ of Mars. The ultraviolet emissions — seen on the planet’s night side by the orbiter’s onboard spectrometer — arise when the solar wind runs into magnetic fields that emanate from Mars’s crust. Charged particles then collide with oxygen in the upper atmosphere, causing it to glow.

Hope, formally known as the Emirates Mars Mission (EMM), arrived at Mars in February. Its primary science goals focus on the planet’s atmosphere, not on its magnetism, so the aurora images came as a bonus. “Seeing it has been just a gift,” says Hessa Al Matroushi, the EMM’s science lead at the Mohammed Bin Rashid Space Centre in Dubai. She adds that her team plans to publish a study based on the observations.

Mars researchers had previously detected ‘diffuse’ auroras during solar storms, as well as ‘proton’ auroras emanating from high altitudes when solar-wind protons rip electrons off atoms to form hydrogen (J. Deighan et al. Nature Astron. 2, 802–807; 2018). The discrete auroras seem to follow the patterns of Mars’s crustal magnetism, which suggests that the planet once had a global magnetic field similar to Earth’s.

The devastating heatwave that struck parts of Canada and the United States late last month would have been extremely unlikely without global warming, researchers have concluded.

The heatwave lasted from 25 June to 1 July, and affected areas that rarely experience extreme heat. More than 500 excess deaths and 180 wildfires were recorded in the western Canadian province of British Columbia.

A group of 27 scientists with the World Weather Attribution project compared the observed heat with maximum daily temperatures predicted by climate models, including simulations of temperatures in an atmosphere unaltered by the effect of rising greenhouse-gas concentrations. They concluded that the global average temperature increase of 1.2 °C since pre-industrial times made the extreme heatwave at least 150 times more likely to happen.

“This heatwave would have been virtually impossible without the influence of human-caused climate change,” says Sjoukje Philip, a climate scientist at the Royal Netherlands Meteorological Institute (KNMI) in De Bilt and a co-author of the analysis. “It was probably still a rare event, but if global warming might exceed two degrees, it might occur every five to ten years in the future.”

The European Commission announced the decision on 30 June, and Leptin will take the reins in October.

Her appointment follows the brief and controversial tenure of Mauro Ferrari, who resigned in April last year after just three months.

Leptin is currently director of EMBO, Europe’s life-sciences organization, which is based at the European Molecular Biology Laboratory (EMBL) in Heidelberg, Germany. She runs research groups at EMBL and the University of Cologne in Germany.

Leptin says that one of her main priorities as president will be to persuade the commission to increase funding in its next financing round, and to launch grass-roots outreach campaigns to convey the value of basic, knowledge-seeking research.

She intends to wind down her labs at EMBL and Cologne. “My job will be ERC president and nothing else,” she says. “But I will miss doing research very much — that’s the one painful thing.”

Racism is magnifying the deadly impact of rising city heat

Italy: Forest harvesting is the opposite of green growth

The rise of ‘ARPA-everything’ and what it means for science

A blood marker predicts who gets ‘breakthrough’ COVID
Action on climate change can provide a shot in the arm for the global economy, economist says
New Nokia smartphone is a ‘military grade’ model with 5G that can take a beating
The unnoticed eye motions that help us see the world
China’s space station is preparing to host 1,000 scientific experiments