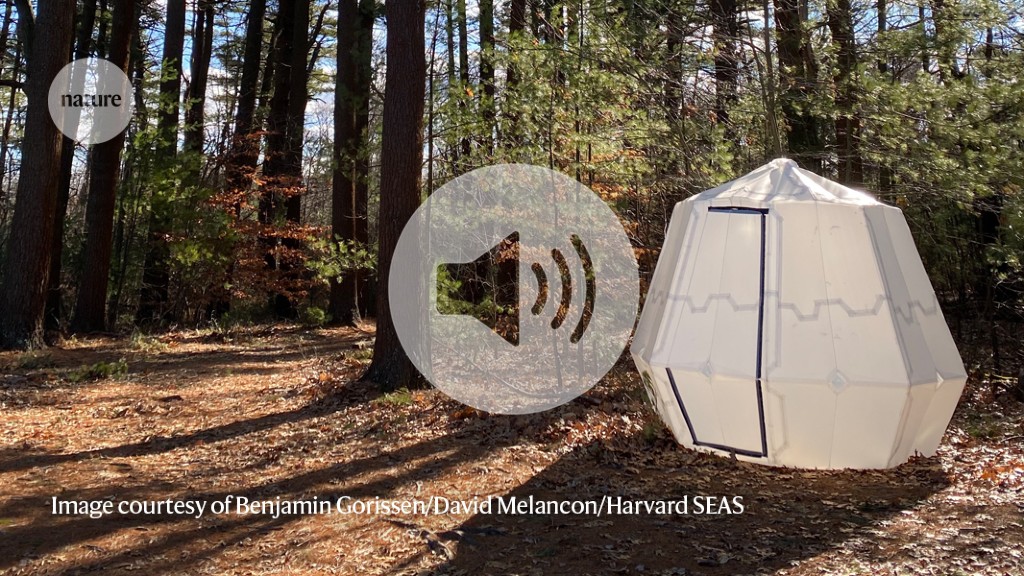 Listen to the latest science news, with Benjamin Thompson and Shamini Bundell.

Drawing inspiration from the art of origami, a team of researchers have demonstrated a way to design self-supporting structures that lock into place after being inflated. The team hope that this technique could be used to create arches and emergency shelters that can be quickly unfolded from flat with minimal input.

News and Views: Large-scale origami locks into place under pressure

Video: Origami-inspired structures could be deployed in disaster zones

Nocturnal fluctuations cause scientists to underestimate rivers’ carbon emissions, and the ‘island rule’ of animal size-change is seen around the world.

Research Highlight: Rivers give off stealth carbon at night

Research Highlight: Animals around the world follow the ‘island rule’ to a curious fate

A ban by wealthy nations on the funding of overseas fossil-fuel projects would do little to reduce the world’s climate emissions and much to entrench poverty in sub-Saharan Africa, argues economist Vijaya Ramachandran.

We discuss some highlights from the Nature Briefing. This time, the first powered flight on another world, and estimating how many Tyrannosaurus rex ever lived.

News: How many T. rex ever existed? Calculation of dinosaur’s abundance offers an answer

Subscribe to Nature Briefing, an unmissable daily round-up of science news, opinion and analysis free in your inbox every weekday.

Youngest Volcanic Deposit from Mars Could Mean Life on the Planet
Did you leave university science? Tell us why
Shareholders approve extension of Momentus deal
China on Mars: Tianwen-1 Lands Successfully on Red Planet
Would Aliens Be Able to See Earth?