Orchids are one of the few plants that captivate the imagination. When orchid fever swept England in the early 1800s, rich nobles dispatched orchid hunters to woods all over the world in pursuit of these rare flowering plants.

Many people were killed in the process. Even today, collectors seek out the rarest and most beautiful wild orchids, and orchids are one of the world’s most traded plant families.

However, several orchid species are currently on the verge of extinction. Several are threatened by illicit natural collection since many orchid species exist in only a few sites, and removing them leads to species extinction. Other orchids, particularly those found in grasslands, are being pushed away by agriculture, grazing, and development. 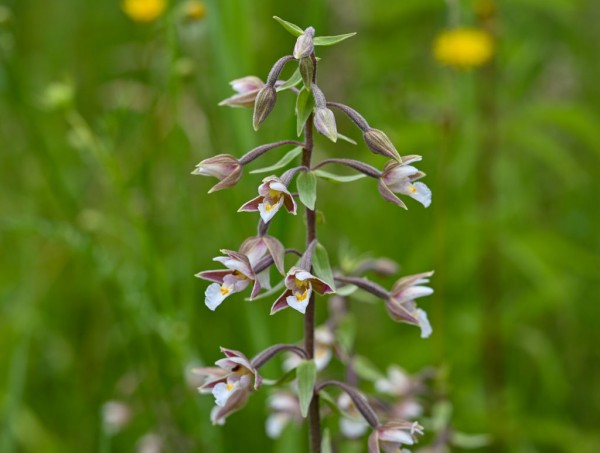 (Photo : Photo by Patrick Pleul/picture alliance via Getty Images)
14 July 2021, Brandenburg, Zehdenick: A flowering orchid of the species Sumpf-Stendelwurz (Epipactis palustris), also called Sumpf-Sitter, in a meadow in northern Brandenburg. A good eye is important when counting orchids by employees of the Brandenburg nature guard. Every flower panicle must be seen.

How fire helped the preservation of the Canby’s dropwort

Deborah Landau, a conservation biologist with the Nature Conservancy, and a small team of committed conservationists and volunteers were searching for and preparing a new strategy to save the orchids from extinction after taking a tremendous risk the year before. She had set fire to the entire region, hoping to save the Oxypolis canbyi plant, also known as Canby’s dropwort. This white-flowering plant grows only in one place in Maryland: the Delmarva Bay, a region of ephemeral wetlands that are wet in the fall and winter but prairie-like and dry in the summer and spring.

“I’ve spent many years opening this wetland back up and the population increased, but it was still struggling.” said Landau

Months before Landau’s hot August visit, she had been at the same location, drip torch in hand, preparing to send flames dancing across the countryside in front of her. Historically, fires would sweep over the marshes, keeping them open for these flowers to thrive. However, because of a misunderstanding of the role of fire in the environment, a history of rigorous fire controls has meant that if a wildfire does start spontaneously, the flames are smothered before they can burn as nature intended. This has allowed trees and tall grasses to take over, producing too much shadow for the flowers to bloom. The Nature Conservancy was granted permission to conduct a fire. It took years to obtain clearance and learn how to burn the property in an environmentally friendly manner.

Landau dashed to the spot where they had been and placed her hand on the ground as soon as the fire was out. Landau had to wait nine months to observe if the plants came back and bloomed, which would indicate whether the fire had done its job. The purpose of the fire was to cleanse the area, and Landau suspected that the plant would thrive in fire-treated soil.

“It was very stressful,” Landau recalled. “I had a lot of second-guessing. You know, maybe I shouldn’t, maybe this is the wrong thing. Maybe I should go and wet the area first. But thinking it through. We knew it was a fire adaptive plant. We knew that this is probably why the plant was there in the first place, because historically there had been fires in the area and naturally it wouldn’t have gotten a little sprinkling of water beforehand. So, we just did hands off. And we burned it.”

There were just three plants before the fire. There are around 3,000 Oxypolis canbyi plants as of 2021. Landau’s risk saved the Canby’s dropwort from extinction.

Top 5 of the World’s Most Rare and Endangered Plants

This is extremely unusual: a plant that spends its whole existence underground. But that is precisely what the Western Underground Orchid accomplishes in its native Western Australia, where it was discovered in 1928.

If you’ve never seen a pitcher plant before, you might be surprised by how large it is. They do resemble a pitcher and may grow to gigantic proportions. These strange plants can only be found in tiny parts of South American jungles and require exceptionally high quantities of precipitation to thrive.

The jellyfish tree has one of the smallest habitats of any plant, growing exclusively in Seychelles, a collection of islands off the coast of East Africa. It was twice considered to be extinct in the last century, but it has been found in the wild, much to the delight of plant enthusiasts.

Despite its macabre name, the corpse flower is extremely unique and attractive, yet it emanates a perfume that people associate with decomposition. The corpse flower is likewise enormous the entire plant may grow to be up to 20 feet tall and almost 16 feet wide and only grows natively in two tiny regions of Indonesia. Specimens of this size can weigh hundreds of pounds.

The Wood’s cycad is perhaps the most uncommon plant on this list. Scientists believe it is extinct in the wild, although examples may be found in botanical gardens across the world. All live plants are clones derived from cuttings obtained from a few surviving examples collected by researchers at the turn of the twentieth century. It appears to be a normal palm tree. It has a broad, robust trunk and may grow to be as tall as 20 feet. While the Wood’s cycad has both male and female forms, no female plants have been discovered, thus they can’t breed naturally unless one is located.

Also read: Top 10 Most Dangerous Plants That Can Be Fatal