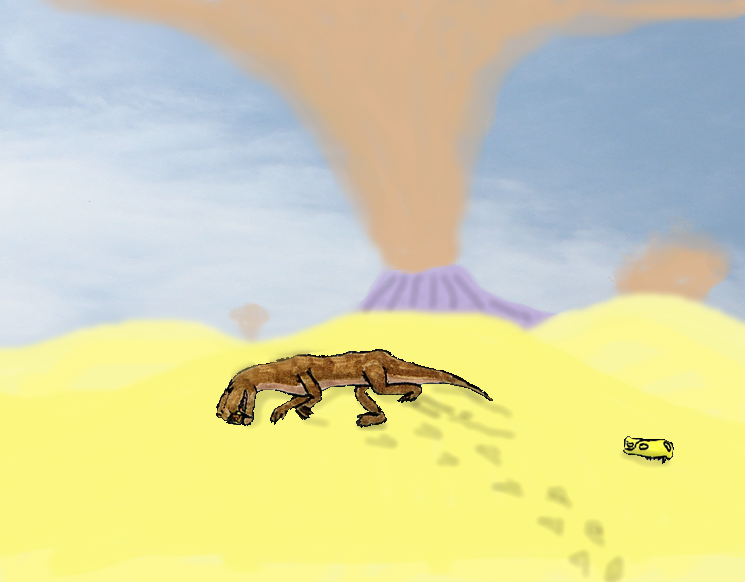 Scientists believe they have just identified the cause of the biggest mass extinction event on Earth, which occurred at the end of the Permian Period and start of the Triassic Period approximately 252 million years ago (MYA).

This event signaled the beginning of what scientists call the Triassic Period. The past Permian Period saw about 75% of all life forms on land and roughly 95% of marine life become extinct in a matter of only a few millennia.

So far, scientists have not determined the exact nature of events that caused this mass extinction. It is still a highly controversial topic.

A proposed cause of the so-called Permian-Triassic extinction event is the massive volcanic activities in the area of modern Siberia, which released huge volumes of ocean floor methane. 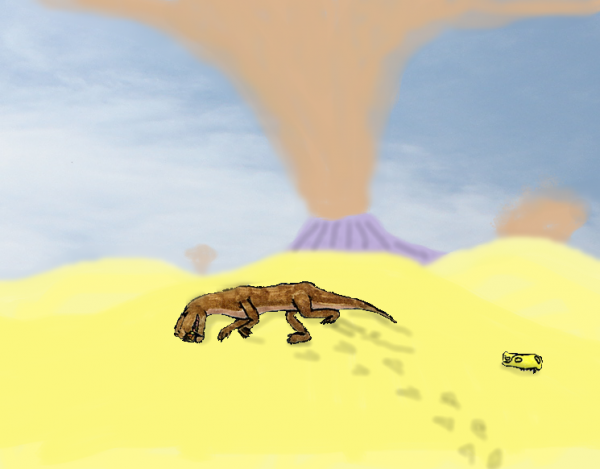 (Photo: Wikimedia Commons)
Artwork of a dead Pravoslavleria, a gorgonopsid from the Late-Permian of Russia. In the background you can see smoking vulcanoes, indicating that the end of the Permian period is closing in. In the foreground, there is a skull of another Pravoslavleria. Scientists believe they have just identified the cause of the biggest mass extinction event on Earth, which occurred at the end of the Permian Period and the start of the Triassic Period.

A new publication in Nature Geoscience conclusively reconstructed for the first time the series of events in this controversial extinction affair. The research team utilized cutting-edge analysis techniques as well as geochemical innovative modeling.

The team was led by GEOMAR Helmholtz Ocean Research Center‘s Dr. Anton Eisenhauer, and is composed of researchers from Canada, Italy, and Germany.

The study utilized fossil brachiopod shells, which are organisms that look like clams and lived over 500 MYA. They used the well-preserved Southern Alps fossils for the study.

The fossil shells have been deposited in the shallow shelf bottom of the Tethys Sea around 252 MYA. According to the first study author Dr. Hana Jurikova, they contained a record of the exact conditions of the environment just prior to and during the start of the extinction event.

The research team measured the various boron isotopes contained in the fossils to determine the pH values of the ocean during that time. They traced the fossils’ pH because the pH of seawater is closely entwined to atmospheric CO2 concentration so that they can determine the latter.

The research team conducted high-precision analyses of the isotopes and high-resolution micro-analyses. The technique enabled them to reconstruct the changes in the atmospheric CO2 as well as trace it to volcanic conditions.

The research team then inputted their data on boron and other carbon isotope investigations on to their geochemical model, which simulated processes on Earth during that period.

Results of the study

According to the study results, the acidification of the ocean and global warming due to the immense expulsion of volcanic CO2 to the planet’s atmosphere caused the extinction of various calcifying organisms in the ocean. According to co-author Dr. Marcus Gutjahr of GEOMAR, their data suggested that methane hydrate dissolution is a highly unlikely cause.

Dr. Jurikova summarized the events as follows. The release of the CO2 increased chemical land weathering and the over-fertilization of the oceans from the nutrients being deposited there for millennia caused a massive depletion of oxygen and changes in elemental cycles. This created a cascading collapse of all interconnected processes and cycles which are needed to sustain life. This ultimately caused the catastrophic mass extinction event.

The study improved and developed analytical methods and was the first to systematically use brachiopods. According to co-author Eisenhauer, the new techniques enabled them to reconstruct the environmental processes in a level of detail not possible before. Their new methods, he says, are applicable not just for the mass extinction event between the Permian Period and Triassic Period, but also for other studies.

READ ALSO: 6 Bucketlist-Worthy Travel Destinations in the US for Fossil Enthusiasts

Check out more news and information on Fossils on Nature World News.

Goldman says a nuclear deal with Iran could send oil prices higher. Not everyone agrees
NOAA’s next constellation could reveal more than weather
Endangered Alpine Parrot Intentionally Moved to the Mountains to Avoid People
Does Bitcoin Mining Have a Disastrous Impact on the Environment?
How Jigar Shah sees making the Energy Department’s loans office mighty again