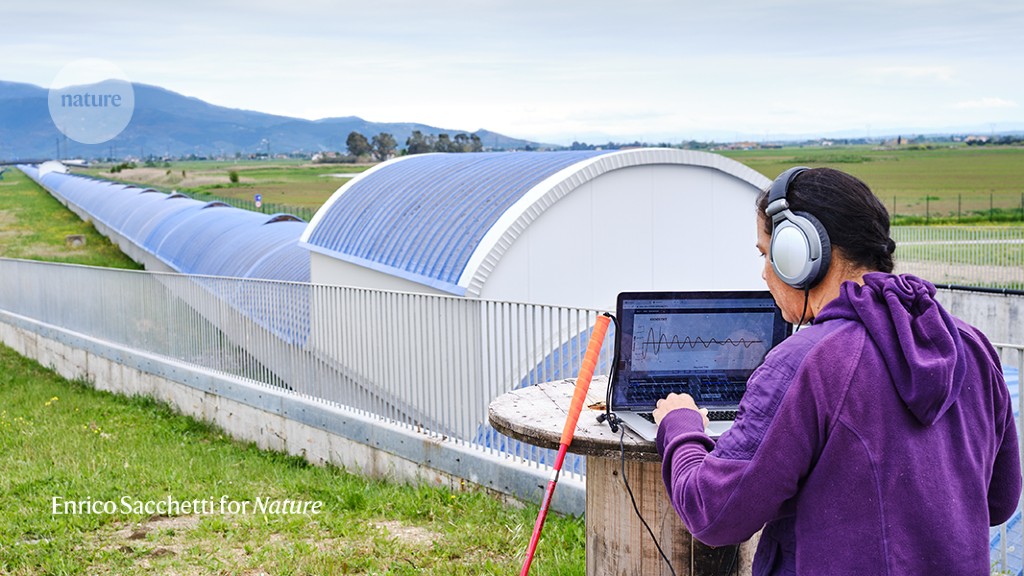 I am standing in front of Virgo — a gravitational-wave observatory near Pisa, Italy, where I work as a computer scientist and astrophysicist — facing one of its 3-kilometre-long arms, in which a laser bounces between two mirrors in an internal pipe. The arms sense tiny changes in space-time (a model that fuses the three dimensions of space and the one dimension of time into a four-dimensional entity) when gravitational waves arrive from the distant Universe.

Some events in the Universe, such as massive stars exploding, produce gravitational waves — undulating space-time that propagates in all directions — and radiation that ordinary telescopes and X-ray telescopes can detect. Those emissions carry information about the origins of the events that produced them or about gravity itself.

I’m from Puerto Rico, and lost my sight in my twenties from degenerative diabetic retinopathy. So I use sound, as I’m doing here, to explore measurements of gravitational waves. I earned a PhD in computer science at the University of Glasgow, UK, so that I could develop software tools to analyse astronomical data by converting it into sound. By ‘listening’ to the mathematics, I want to identify the possible X-ray counterparts to gravitational waves detected by Virgo.

Gravitational-wave data from colliding black holes is called a ‘chirp’: it sounds like a bird when it’s converted into sound.

Virgo, now closed for upgrades, will reopen after June 2022. Meanwhile, I’m working with colleagues on Research Infrastructures For Citizens in Europe. We’ll develop software that anyone, regardless of where they live or of any disabilities, can use to make multisensorial data and contribute to research.

To get a sense of Virgo’s size, I’ve walked to the end of one of its arms and back. I like to sing while walking to focus on my destination. But when the detector restarts, it is so sensitive that it might pick up my voice. So the people in the control room sometimes tell me I cannot walk and sing.

Five hundred days between pay cheques: the road I took to revive my career

How Zoom helped the neurotypical world hear my autistic voice

US achieves laser-fusion record: what it means for nuclear-weapons research

Unusual width of the superconducting transition in a hydride

Why gassy planets are bigger around more-massive stars