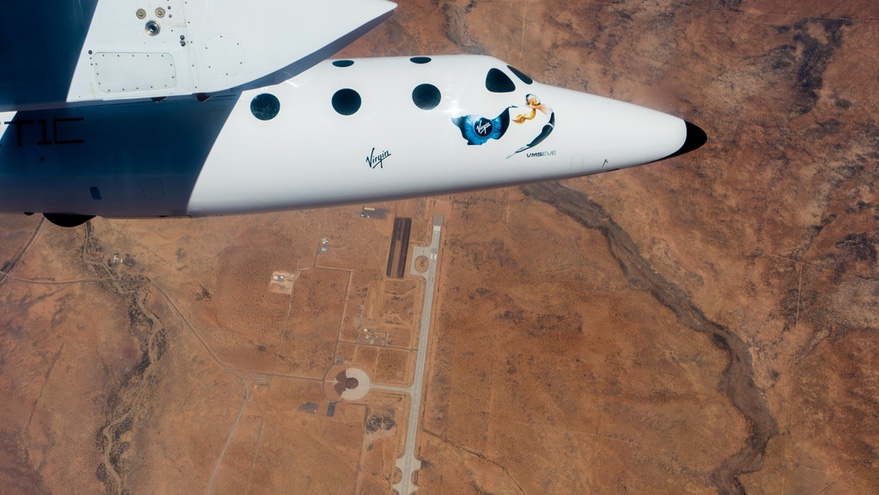 Virgin Galactic had expected to resume test flights of SpaceShipTwo in May after correcting a problem that aborted the last powered test flight of the vehicle in December 2020. Engineers concluded that electromagnetic interference (EMI) caused by a new flight control computer on the vehicle triggered a “fail-safe abort” just as it ignited its hybrid rocket engine, shutting down the engine and forcing the vehicle to glide back to a landing at Spaceport America in New Mexico.

In an earnings call with financial analysts, Mike Moses, president of space missions and safety at Virgin Galactic, said the company had taken steps to reduce the interference. That included installing new hardware filters to suppress the interference created by the computer and improving shielding on wire harnesses.

Those solutions have been tested in the lab and installed on VSS Unity, the SpaceShipTwo vehicle currently used for flight tests. “We can see that we’ve significantly reduced the EMI, on the order of 10 to 20 decibels,” he said, or a reduction of more than 90%. “Our reviews have concluded that we have sufficiently addressed the EMI issue, and that Unity is ready for flight.”

While Unity may be ready for flight, the WhiteKnightTwo aircraft that carries the plane aloft, called VMS Eve, may not. Moses said that after three flights of the plane from Spaceport America in the last two weeks, post-flight inspections revealed “a potential wear-and-tear issue as requiring further evaluation and analysis.”

Moses, in response to later questions from analysts, did not disclose the specific component of the aircraft that was at the heart of the issue, but described it as a “family of items that relate to fatigue and long-term stress” of the airplane. It was not an issue with the number of flights of VMS Eve, which first flew in 2008 and has made fewer than 300 flights since.

Engineers are currently examining the plane to determine if additional maintenance is needed now to correct that problem, with an update expected next week. Virgin Galactic had planned to perform work on the plane this fall during a downtime that would also include work on VSS Unity, but Moses said engineers are now looking at whether some of that work needs to be moved up.

If maintenance is needed now, it would delay the schedule of flight tests for SpaceShipTwo, but Moses said it was “a little too early” to know how long that would be.

The company is, for now, sticking to the same schedule of test flights it announced in February. Two powered test flights with company personnel on board will be followed by a third with company founder Richard Branson. Virgin Galactic will then perform a commercial flight for the Italian Air Force before going into a maintenance period in the fall.

“Both Eve’s and Unity’s upgrades and modifications are to help give them more reliability of predicting flight cadence as we shift those ships into commercial service,” said Michael Colglazier, chief executive of Virgin Galactic. The company’s first SpaceShip III suborbital vehicle, VSS Imagine, revealed March 30, will also undergo work during that time to prepare for powered test flights.

The company offered few other updates about the status of its business during the earnings call. Doug Ahrens, chief financial officer, noted that the Italian Air Force flight will generate $2 million in revenue, or $500,000 per seat. Negotiations for similar flights for microgravity research or astronaut training have been at prices of about $600,000 per seat.

However, Virgin Galactic has not set new pricing for space tourism flights, and has yet to reopen ticket sales. Ticket sales will reopen around the time Branson flies, Ahrens said, but only for a limited time.

“We currently expect to have the sales funnel open for a limited period of time, and plan to add a finite number of incremental members to our private astronaut community,” he said. “We look to build an appropriate backlog relative to the pace of our overall fleet expansion. Our goal is to address some of the consumer demand for our service while maintaining an appealing price point for the experience and an appropriate time horizon for flight.”

Those comments come less than a week after Blue Origin announced it would auction off a seat on the first flight of its New Shepard suborbital vehicle with people on board, scheduled for July 20. Blue Origin also has not formally opened ticket sales for its suborbital flights or disclosed pricing.

“I think that’s exciting, but it will be a pretty high price, if I had to guess,” Colglazier said of the Blue Origin auction. “It will show just how amazing this opportunity is going to be.”

Having two successful companies, he added, “will normalize the idea of human spaceflight to the market” and create interest, and played down any concern that Blue Origin might beat Virgin Galactic to flying the first paying customer to space. “While I think there will be great media attention around both moments when we are going up into space, I don’t think it matters to our business overall.”

Virgin Galactic reported a net loss of $130 million in the first quarter of 2021, with no revenue. The company said it had $617 million of cash and cash equivalents on hand, and Ahrens noted it would “continue to evaluate opportunities to access the capital markets to grow and scale our business.”