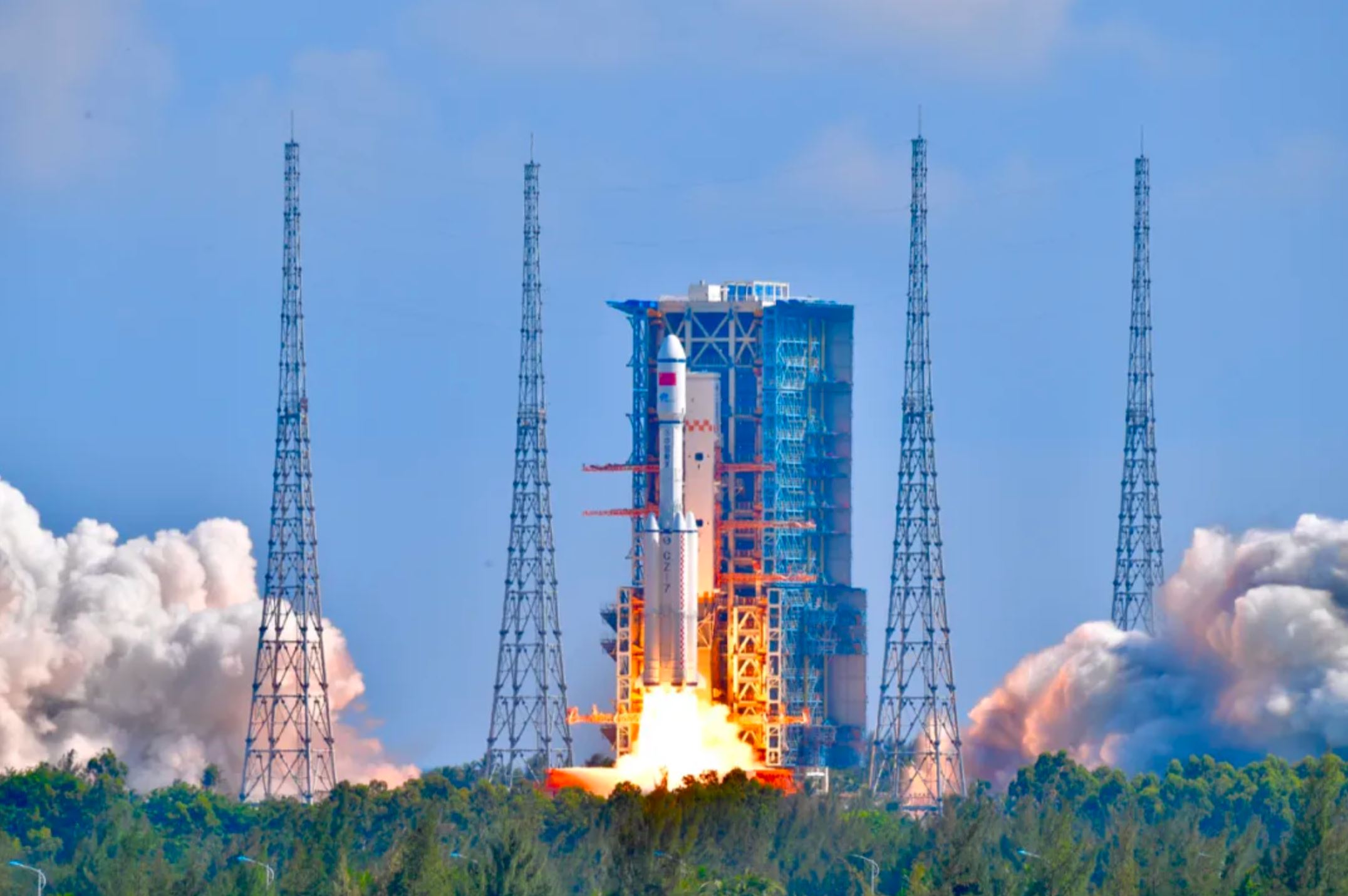 A Long March 7 rocket lifted off from Wenchang at 3:10 a.m. Eastern September 20. Tianzhou-3 separated from the second stage after 597 seconds, having entered orbit and on track to catch up with Tianhe.

Deng Hongqin, director of the Xichang Satellite Launch Center, which administers Wenchang, declared the launch was a complete success during live coverage.

Tianzhou-3 is carrying around six tons of supplies for the upcoming crewed Shenzhou-13 mission as construction of China’s space station continues. The cargo consists mainly of fresh provisions for astronauts for what will be China’s longest human spaceflight mission yet. Other payloads include experiments and equipment.

The six-month-long Shenzhou-13 mission will launch from Jiuquan in the Gobi Desert as soon as early October. The spacecraft and its Long March 2F rocket have been in a state of readiness at Jiuquan for some time to allow possible rapid response to an emergency in orbit.

The crew is rumored to include one of China’s two women astronauts. Wang Yaping, a veteran of 2013’s Shenzhou-10 mission, is in training for space station missions.

The Tianzhou-3 mission is the fourth for construction of the Chinese space station. Tianhe, the station’s 22.5-ton first module, launched late April 28 and is currently in a 386 by 380-kilometer orbit inclined by 41.5 degrees.

The first crewed mission, Shenzhou-12, returned to Earth Sept. 17 following 90 days docked with Tianhe. Following this the Tianzhou-2 spacecraft, which provided supplies and equipment for the crew, undocked from Tianhe’s aft port on Saturday and carried out circumnavigation and forward docking maneuvers, making way for Tianzhou-3.

Tianzhou-2 and Tianzhou-3 will remain docked with 16.6-meter-long, 4.2-meter-diameter Tianhe (“harmony of the heavens”) until after the arrival of Shenzhou-13.

This requires the Shenzhou spacecraft to complete a radial, or R-Bar, rendezvous and docking with Tianhe’s nadir docking port. In preparation for this step Shenzhou-12 tested the relatively more challenging radial rendezvous without docking before returning to Earth. The spacecraft approached to and stopped at distances of 200 and 19 meters.

Tianzhou-2 will be used for a verification test of the space station’s main robotic arm before deorbiting. The arm will test its ability to manipulate modules to the lateral rings of the Tianhe docking hub.

China has planned 11 missions to complete the three-module, 66-metric-ton Tiangong Chinese space station by the end of 2022. Tianzhou-3 and Shenzhou-13 will be the final two of the technology verification phase.

Unofficial projections have Shenzhou-13 running from October to March 2022. The Tianzhou-4 supply mission would then follow in around a month later, with Shenzhou-14 lifting off in May 2022. This crewed mission will oversee the main construction developments for the space station.

The two experiment modules, Wentian and Mengtian, are to launch May-June and August-September respectively. Finally, Tianzhou-5 would launch in October in preparation for Shenzhou-15 in November 2022, completing the construction phase.

China has hinted at plans to extend the Tiangong complex to six modules. The expansion would utilize backup modules or potentially include an international contribution.

This solar-powered electric bicycle is making a 6,500-mile loop around US
Betting on flexibility: Intelsat’s post-bankruptcy growth strategy
This Planet Survived the Death of its Star
Meteorite That Crashed Into Canadian Woman’s Home Can Reveal Much About Solar System’s Origin
US Moving Towards 30% Electricity From Wind & Solar